The town itself is laid out in a square grid; the streets are full of mountain bikers, donkey carts, and expedition minibuses.  it's little more than a handful of picturesque adobe streets clustering around a pretty tree-lined plaza and postcard-perfect church.

San Pedro is also the base for a variety of excursions to the Los Flamencos National Reserve, which includes Chile's largest salt flats and a breeding colony of flamingos, the polychrome desert scenery of the Valley of the Moon and high Andean lakes. Outside the reserve's boundaries, the village of Toconao has distinctive volcanic block architecture . 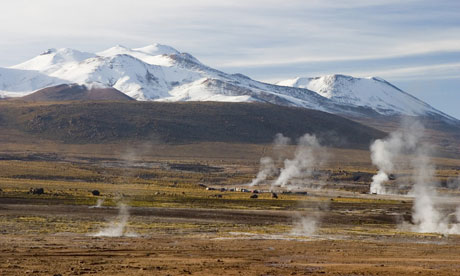 January and February,although summer months, can bring sudden winter wind. Last year 46 soldiers were caught in such a wind and froze to death in minutes. This is another good reason to hire a guide. If you rented a car, you would be likely to return it damaged after driving the rutty roads to the geysers.

San Pedro de Atacama is a privileged zone to watch the sky and its stars.

Lots of agencies offer astronomic tours every night, focused on all the people who want to know the mysterious Atacama sky.
I really recommend this tour since they got huge telescopes and it is the perfect place to watch the sky.
In this tour you are taken 10 minutes away from the town, the guides provide you a geographic explanation of the sky and its constellations, continuing then with observation of really amazing objects, such as, Moon Craters, Saturn Rings, cumulus of stars, galaxies, and other wonders of the universe.

Tours end sharing experiences around hot chocolate, coming back to San Pedro timely enough to continue watching the night or to take some rest for the next day.

The tour takes around 3 hours and starts by 8:00 p.m., depending on the time of the year.

There are huge sand dunes, rocks with salt crystals and quartz through them and mountains all around
Because of its lack of humidity, there is no life here, which has turned it into one of the most inhospitable places on the planet.
From a large sand dune in the valley, you can  appreciate all the marvelous and surprising features of this zone. In Valle de la Luna there are dry lakes where the composition of salt makes an AMAZING white covering layer of the area, escarpments in all colors; green, blue, red and yellow, which color the sunlight changes depending on the time of day and is especially beautiful at sunset. It presents diverse saline outcrops which look like real sculptures and contains as well as a great variety of caverns.

At nights of a full moon, the valley also presents an indescribable, majestical and silent aspect, coldly beautiful and imposing.

In Valle de la Luna I have experienced the most natural beauty and strange lunar landscape !
It's visited by hundreds, if not thousands of tourists every year, being one of the most famous attractions of Chile.

The valley is also considered one of the driest places on earth, as some areas have not received a single drop of rain in hundreds of years.

Another excursion I did was to the
Salar de Atacama

Underneath the white and rough surface of Salar there is a big salt lake hidden by the thickness and the rough scab of salt that boast of containing the greater lithium reserves of the world.
To the east is enclosed by the main chain of the Andes, while to the west lies a secondary mountain range of the Andes called Cordillera de Domeyko. Large volcanoes dominate the landscape, including the Licancabur, Acamarachi, Aguas Calientes and the Lascar (The most active in chile right now).  All of them are located along the eastern side of the Salar de Atacama, forming a generally north-south trending line of volcanoes that separate it from smaller endorheic basins.

Reply #1
Wow, that place is absolutely stunning!!! I went to the Salar D'uyuni in Bolivia which was amazing and I'd love to go some time to the Atacama Desert..
Offline

I have been here also. Oh what an amazing fun place to go. Swim in a hot pool high in the Andes or swim in a freezing salt lake - all in one day. Geysers, sulfate mounds, mountains, sand boarding....So different and so enjoyable.

This is a very important principle in life and travel. You have a certain amount of energy a day, you can either place that energy on a thought in your head or you can place it on the experiences in the present. Where you consistently place your energy will determine who you are and how much fulfillment you get out of life.

Amazing photos. I'd love to go there.